One of the best bars in London is The Anchor, Bankside SE1,a traditional place which dates back to the 17TH century overlooking the Thames, allows clients of the Globe Theatre to share with other customers an unforgettable night; not far from there is The George Inn 77 Borough High Street, SE1 that dates from the same era and is a traditional English pub, renowned for being the only place intact ancient inns galleries across London. 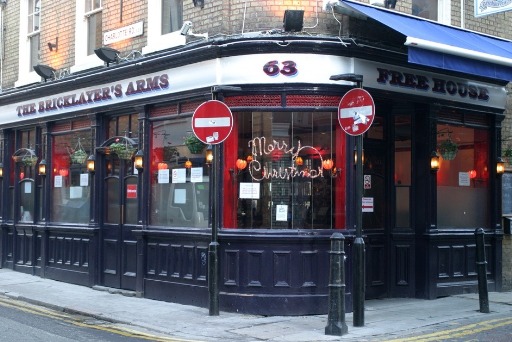 The Point 101, 101 New Oxford Street, WC1, is famous for defying the laws of the city with respect to consumption and hours of alcohol in bars, yet it opens late, presents famous Dj’s and attracts many customers becoming almost a disco.

In London the entry policy is very flexible, ie most of the bars in Soho allow entry to members and selected individuals, but not the case of the Yo! Below bar, located the bottom of Yo! Sushi, 52 Poland Street, W1 that allows customers to enjoy their cartoons of Japanese origin that are represented on giant screens throughout the night while the staff involved in the Karaoke, also offers massage and beer taps to pour yourself. Other bars that allow the entry of any person are Akbar 77 Dean Street, and Amber, 6 Poland Street W1. These two are lively, elegant and fashionable; residence time exceeds 23:00, ideal for fun. There are also lots of Oyster Bars in London. And the most famous one is the Boisdale of Canary Wharf, Cabot Place, Canary Wharf, E14.

Going back to medieval-themed bars found the Nell Gwynne, 1-2 Bull Inn Court, off the Strand WC2, featuring a small space but elegant and comfortable; other similar facility is the Lamb and Flag, 33 Rose Street WC2, dates from the 17TH century and has two plants where in summer you can enjoy the fresh air on the terrace and communicates with the ground floor by a very scruffy staircase.

The bars that are decorated by the Victorian era are The Salisbury, 90 St Martins Lane WC2 and The Lamb, 94 Lamb’s Conduit Street, WC1. Another possibility as far as bars are concerned, are the places a little less atypical but no less elegant. Among them is the bar Two Floors, 3 Kingly Street, W1 which has a slightly misaligned facade and is characterized by having no sign on the front of the place.

For the beautiful people there are bars of a very high level, such as the West Bar at Sketch, 9 Conduit Street W1, and Rockwell, which has been voted Best Bar of the Year in 2002 by Time Out and Evening Standard, located in the Trafalgar hotel’s ground floor, in Trafalgar Square WC2. Both bars are known for their elegance, decoration and be elected to the most famous meetings in London.

As for gay bars, London definitely has the best option. For women, the options are usually a bit more limited, but there is a bar just for them called The Candy Bar, 4 Carlisle Street W1. For men the restaurants, pubs and cafes in the streets of Old Compton Street in Soho are purely gay. Perhaps the gay bar is the most current G. A. Y. Bar, 30 Old Compton Street, located very close to the traditional bars The Yard, 57 Rupert Street, W1 and The Edge, 11 Soho Square W1.

On the outskirts of Soho can also turn to the bars at the time of planning the night. For example in East London find Vertigo, Level 42, Tower 42, Old Broad Street EC2, located almost 180 meters is one of the highest bars across Britain, obviously offering the best views of the city through its large windows, only open in the evenings on weekdays and is located in the financial district of the City.

To the west, in Notting Hill, one of the newest and most popular bars in the area is the Under the Westway Bar and Restaurant, Westbourne Studios, 242 Acklam Road, W10. This restaurant occupies the ground floor of a huge old warehouse. To enter you must ring the bell at the front desk and explain why you want to enter the bar. The ceiling of the room is actually a concrete overpass known as Westway. Two pubs so different one from the other as the day and night are the old and simple Portobello Gold, 95-97 Portobello Road, W11 and one of the most modern pubs in the area, The Westbourne, 101 Westbourne Park Villas, W2.

Another highlight is the bar The Bricklayers, 63, Charlotte Road EC2, where you might bump into a celebrity. This bar is located in the Old Street area, close to a popular pub called the George and Dragon on 2 Hackney Road E1.

The Brazilian style of Kick Bar, 127 Shoreditch High Street, E1, is adorned with football and has the warm atmosphere that is rarely seen in the city. If the idea is a bar with design and style the right place is the Medicine Bar, 89 Great Eastern Street, EC2, where also invited Dj’s shows can be seen. And perhaps the best bar where besides having a good time in a nice place you want to enjoy London’s gastronomy is indicated Grand Central, 91-93 Great Eastern Street, EC2, perhaps one of the most beautiful in all England.