The Restaurant Diana, open in 1930 and located in the city center, is a classic and welcoming atmosphere and decor reminiscent of the fifties and also has outdoor seating for dining in summer. 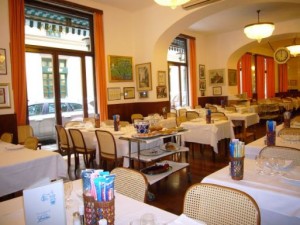 It proposes a kitchen petronian, but also open to the best of other cuisines, simple and accurate in every detail of taste and flavor. The appetizers of the restaurant include a selection of the best local meats and fresh and aged cheeses, also inviting proposals based on vegetables and fresh fish.

Among the pasta dishes, the specialties are the tortellini in broth, ricotta rortellini , lasagne, noodles, pasta made by hand. Among the main courses, grilled meat, tantalizing dishes such as rognone trifolato, basket of roasts, boiled, fried mixed with Bolognese.

The Restaurant Diana in Bologna also has a good cellar wine and a friendly selection of liquors and spirits. Generally offers the availability of 150 seats.